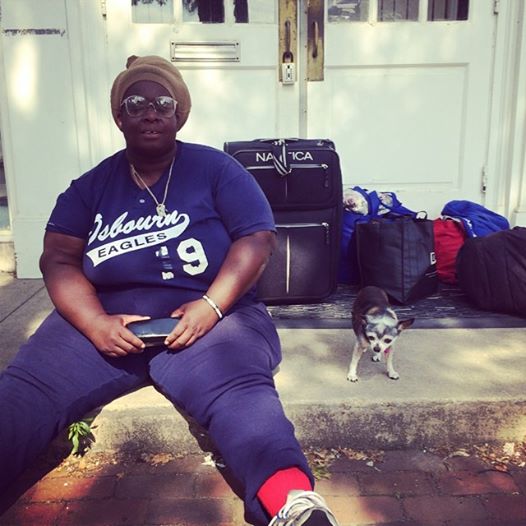 Finally, I ran into her again. When I first moved to my new creative workspace, I would see Abdulah, the homeless woman, from time to time sitting in front of the vacant building a few doors down, surrounded by bags, rags and newspapers.  Sometimes, it was cold and I would see her curled up in a corner.  Unlike other homeless strangers who I run into occasionally, Abdulah never begged for money or asked me for anything. Some days when I worked late and ordered dinner for myself to take home, I would see her on my way to the car and gave her my dinner. She never asked – it’s me that asked her if she wanted some food.  Then she would say yes.  When I gave her my food, she always said, “thank you” and that was all.

At one point, I even thought about asking her to clean our office if she wanted to make some money, but we are so organized and neat, the office does not need much cleaning.  I hadn’t seen her for awhile in Old Town Alexandria, and I often wondered how she is doing.  To my surprise, this past Friday, Nini and I were walking to the office and we ran into her in the same spot! I was so happy. This time, I stopped to talk with her. She told me her name is Abdulah, she’s from North Carolina, had lost her job, and made her way up to the DC area looking for a new one. I offered her my suitcase that I had in the office (see photo) so she wouldn’t have as many bags to carry.

When I asked her if she ate anything and she said no. I sent my 16-year-old intern, Kat, to give her $20 for some food and coffee. Kat gave her the money and told Abdulah that she would pray for her. In response, Abdulah simply smiled and said, “It’ll get better.”

This was such a great way to start a Friday for Kat, Nini, and I. We felt uplifted and inspired by how positive Abdulah was, despite her current situation.

What a great lesson for us all!

16 Reasons Why I Got a Dog Instead of a Cat.

How COVID Might Transform Our World – A Historical Perspective – Dr. Alan Glazier